The Technology Behind Wheel Weighers 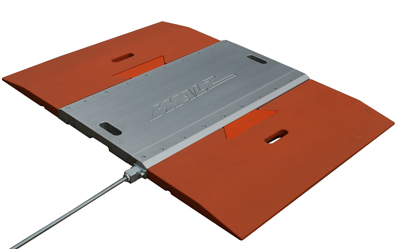 You may have seen wheel weighers at truck weigh stations located on the side of interstate highways, but did you ever think about the purpose of these heavy duty wheel weighers?

These weigh stations are designed to ensure that the trucks travelling between States should not exceed the maximum limit of safe weight standards as prescribed by State law. In essence, there is a complex technical system working behind these wheel weighers, and many types of weighing scales available.

Most wheel weigher systems are are authorized for the sole purposes of maintaining State law for trucking and freight regulations.

Load cell weighing scale is the most commonly used truck weighing scales of all. This type of truck scale is comprised of a number of cells. The cells are made from industrial grade steel and they are very strong.

The cells are connected with strain gauges and all the gauges are joined in a wire shape that carries out electrical current. When a truck comes above a portable wheel weigher scale, the level of electrical signals changes across the strain gauge wire. This information is redirected towards the junction box.

Its purpose of these truck scales is to determine the differences in the value of current on the load cells. This way the weigh scale system determines the exact weight placed in the cells.

The working mechanism of the bending plate weighing scale is somewhat similar to the load cell scale. The weight calculation is done by determining the amount of stress placed on the plates whereas the load cell system works by analyzing the differences in electrical current.

Wheel weighers with bending plate technology works better in plain land. This weigh scale also has metal plates with strain gauges attached with each plate. A truck comes onto the bending plates and the stress placed on each plate is calculated via strain gauges. The cumulative weight information from each strain gauge is added together in order to determine the total weight.

Piezoelectric weighing scale is most unlikely to be seen at weighing stations. This truck scale system follows the piezoelectric technology, a high tech weighing method. This type of scale has sensors beneath the weighing plates. These plates are conductive and the sensors are pressure sensitive. Whenever a truck is pulled onto the sensor plates, the amount of voltage streaming throughout the conductor material suddenly changes. The sensors record this voltage difference and calculate the weight accordingly.

When it is the time to compare these 3 different truck weigh systems in terms of accuracy and efficiency, the load cell wheel weighers win undoubtedly.

Designed by only a select few manufacturers, such as Walz Scale these truck weigh systems are widely used and give accurate results in any terrain.

The Piezoelectric weighing technology is comparatively new and it needs more improvements for efficient weighing purposes. The load cell technology works faster and give accurate weights every time. However, all these technologies have their own set of pros and cons. For instance, the bending plate scales are ideal for use on the plane lands as it uses the stress values in determining weight.